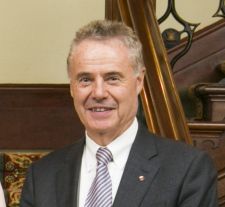 John completed his training at the Universities of Cambridge, University of California, San Diego and Harvard Medical School and held a junior research fellowship at Wolfson College, University of Oxford, before moving to McGill University, Montreal, Canada. More recently he served as Chair of the Department of Physiology at the University of Toronto, and later as Vice President Research and Associate Provost of that University. He was the inaugural Scientific Director of the Canadian Institutes for Health Research, Institute of Human Development, Child and Youth Health and served as President and CEO of the Michael Smith Foundation for Health Research In Vancouver BC. Author of more than 500 peer review papers and chapters, he has trained more than 100 graduate students and postdoctoral fellows, and held in excess of $25 million peer reviewed research funding. He is a Fellow of the Royal College of Obstetricians and Gynaecologists, the Institute of Biology, the Canadian Academy of Health Sciences and the Royal Society of Canada.
John will commence the role from 1 September and looks forward to advancing the WAHTN so that it will be recognised as an Advanced Health Research and Translation Centre operating at an international level within the term of his appointment.