The AusBiotech conference is the premier annual conference for Australia’s Life Sciences sector. The 2019 conference brought together Australian and international biotech leaders and stakeholders in Melbourne for three days of education, skills building and networking. WAHTN was one of the Think Perth delegation who attended the conference. We were accompanied by representatives from the City of Perth, The University of Western Australia, Epichem, Linear Clinical Research, Telethon Kids Institute, Proteomics International, Lazcath and the Perth Convention Bureau to showcase the burgeoning life science sector in Perth and WA to a national and international audience.

Western Australia has shown the largest increase in life science companies. Since 2017 we’ve had a 50% increase in the number of organisations, increasing from 119 to 179 in 2019.

A young West Australian company OncoRes Medical won the 2019 Australian Emerging Company of the Year Award. Dr Katharine Giles (Chief Executive Office and Managing Director) accepted the award on behalf of OncoRes Medical (see image below). This prize was awarded on significant achievements by a company working in the biotechnology or life sciences sectors, and is specific to companies under five years of age. We congratulate our friends at OncoRes Medical for a well-deserved award. 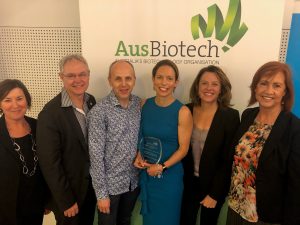 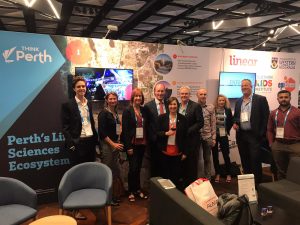 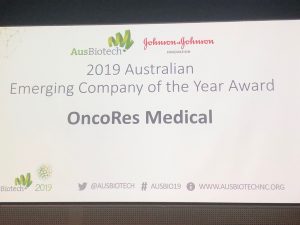